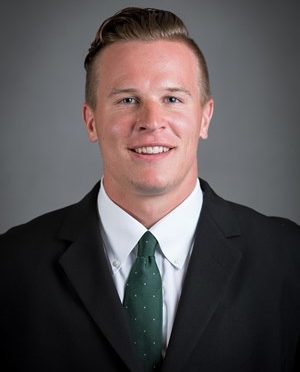 Willekes is the most impactful player on the Spartans defense through four games this season.  The junior defensive end added another sack on Saturday to set his total at four for the season. Willekes showed a strong bull rush against Central Michigan and used a rip move to get upfield and force a sack to end the first half. The Rockford, Michigan native anchors a defense that has held opponents to under 70 rushing yards in each game this season. If there is one weakness in Willekes game it’s his lateral quickness.  The junior got caught lost in space when a toss came his way and he couldn’t get outside quick enough to turn the run back inside. The former walk-on should continue to be a factor in the Big Ten and has a game reminiscent of ex-Spartan and former San Francisco 49er Marcus Rush.

Bunting rose to the challenge of blanketing the Spartans best wide receiver, Felton Davis (6’4, 200), on Saturday.  Despite giving up a few inches, Bunting was able to get in Davis’ chest with a quick punch to get the receiver off of his routes.  Bunting used the press coverage to his advantage to pick off a pass in the red zone. The interception was Bunting’s eighth in his career.  Michigan State managed just 185 passing yards and Bunting was a huge reason why.  Look for the junior to continue to add to his already impressive resume’.

Head coach Mark Dantonio  is no stranger to coaching NFL-caliber quarterbacks: Nick Foles, Brian Hoyer, Kirk Cousins and Connor Cook have all spent time in the NFL after their years in East Lansing. Lewerke has the potential to add himself to the list and is the most athletic of the bunch.  The junior quarterback used his legs to rush for two touchdowns against the Chippewas.   After sitting in the pocket, Lewerke turned his back to the pass rush and scored a touchdown to give MSU a 14-3 lead.  The physical tools are all there for Lewerke but you would like to see the junior quarterback cut down on the turnovers.  The Phoenix native threw an interception to the aforementioned Bunting, which he could have thrown away instead of forcing it to Davis, who after being jammed at the line ran a slant that allowed the cornerback to come underneath the route. For the season, Lewerke has thrown five touchdowns and five interceptions.  As the Spartans deal with injuries at their skill positions and along the offensive line, more will be asked of the junior quarterback in terms of decision-making.