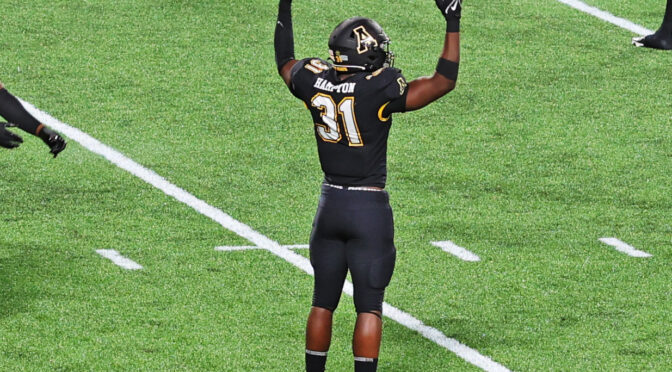 There has to be a place for Appalachian State’s Nick Hampton on the next level.

If there is a play to be made, the Mountaineer will find a way to make it. In 2022, he changed his number from 31 to nine. There has been no subtraction from his steady four-year run of production.

Over the course of the last four seasons (through 10-2-22), Hampton has tallied 36 tackles for losses. That total includes 24.5 quarterback sacks.

So how does he consistently win rushing the passer?

Although relatively high in his two-point stance, he can turn the corner when running the hoop. Hampton uses his 81-inch wingspan to keep blockers off of his frame when twisting from the outside-in on stunts (3rd and 9, 3rd QTR, ECU ’21).

Cleaning up the false step that he has getting out of his two-point stance at either outside linebacker spot could be a focus. Even with it, he transfers speed-to-power on occasion versus much bigger offensive tackles.

Team have to prepare for the work he puts forth on the kick coverage units as well, where his skill at dislodging from blockers has paid dividends in the past (see 1st QTR, ECU ’21).

In 2022, Hampton has gotten off to another fast start after finishing second in the Sun Belt Conference with 11 quarterback sacks as a junior.

The former Westside High School (S.C.) product puts up amazing numbers in the weight room (600-lb sumo deadlift according to Appalachian State’s website-https://appstatesports.com/sports/football/roster/nick-hampton/7624) and matches them with similar production on the field. He should impress with his testing numbers whenever he declares for the draft.

However, it is the numbers he puts up on the field that continue to draw praise from opposing teams.

Check out his miles per hour when chasing some of college football’s fastest players (runs down ECU RB Keaton Mitchell, 3rd QTR, ECU ’21).

Mitchell hit 22.6 miles per hour on an 81-yard touchdown run against Old Dominion in 2022. This is this fastest time recorded in college football this season.

So how fast is Hampton?

He gets to most of his destinations in just the Nick of time.