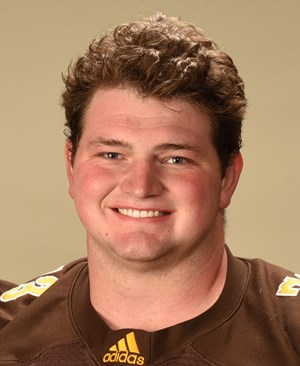 Strengths: Held his own against Missouri’s Jordan Elliott (2020 Cleveland Browns 3rd round pick) especially when he lined up in the one-technique DT (Missouri ‘19). Light on his feet. Can seal the backside on outside runs (Tulsa ‘19). Versatile. Has taken game reps at both guard positions as well as his natural center position. Shows the ability to chip- and-climb; and runs his feet once connected (Colorado State ’20). Led Wyoming with over 100 knockdown blocks, per the team’s statistics.

Weaknesses: Not a naturally big guy, came to school at 240 pounds and was thought to be a tackle (https://gowyo.com/news/2020/11/25/football-kevins-commentary-keegan-cryder.aspx). Is he strong enough to block stronger interior lineman at the next level? Loses wrestling matches and can be thrown to the ground (1st QTR/4:40, Boise State ’20). Will have to win with leverage and technique. Not a natural mauler. Can be tricked on games run by the opposing defensive line (Hawaii ‘20).

Summary: Wyoming has had its fair share of NFL offensive linemen, including former Cowboys center Chase Roullier (Washington Football Team), who recently signed a four-extension. Cryder carries some similarities to Roullier, but lacks the same consistent hip roll to stick on defenders. He flashes upside against better athletes and has enough quick strike ability to make up for his lack of mass.