A battle of the Bay Area featured two of the worst teams in the NFL. However, San Francisco thoroughly dominated its area rivals on Thursday Night Football, winning 34-3. DraftNasty’s Troy Jefferson gives his impressions in this in game report:

Undrafted second-year quarterbacks don’t usually complete 16-of-22 passes for 262 yards and three touchdowns in their first career start.  But thanks to a poor defense and an excellent game plan, Mullens was aided in his debut. Head coach Kyle Shanahan’s first 15 script of play calls allowed his quarterback to get comfortable through the use of bootlegs, screens and power running.  The 49ers scored their first touchdown of the game with a play action pass from Mullens to wide receiver Pierre Garcon, who ran wide open over the middle.  Mullens’ teammates said his ability to perform on the primetime Thursday night stage didn’t surprise them.

“It was cool that he didn’t change under the big lights and these circumstances,” cornerback Richard Sherman said, during a postgame press conference according to ESPN.  “We’re not really surprised. We’ve seen him do it in practice. He plays with a lot of confidence.”

Mullens executed the game plan to perfection and might see additional playing time as the team’s primary backup, thanks to a strong performance.

Mullens looked to tight end George Kittle whenever he needed a big play.  Kittle finished with four catches on four targets for 108 yards and one touchdown.  The second-year tight end made an impressive one-handed grab over the middle on 2nd and 12 and sprinted for a 71-yard gain to open the third quarter.  On the season, Kittle has caught 41 passes for 692 yards and three touchdowns.  As the 49ers cycle through quarterbacks, Kittle has remained a constant at tight end and his production hasn’t slipped no matter who has been behind center.

The 49ers had their way with the Raiders but Oakland committed more than their fair share of mental mistakes.  On offense, Derek Carr was harassed all evening due to a  shuffling offensive line because o 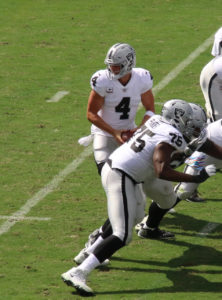 f injuries. The Raiders gave up eight sacks and as a team totaled just 242 yards of total offense. Defensively, the Raiders were penalized for having too many men on the field in the second half, left receivers wide open on bootlegs and couldn’t set the edge to prevent long runs.  Oakland traded away young talent in Amari Cooper and Khalil Mack and it looks like their eyes are on the future. The Raiders might not win many games in 2018 thanks to a lack of talent but that doesn’t excuse the mental errors that plagued both sides of the ball against the 49ers.