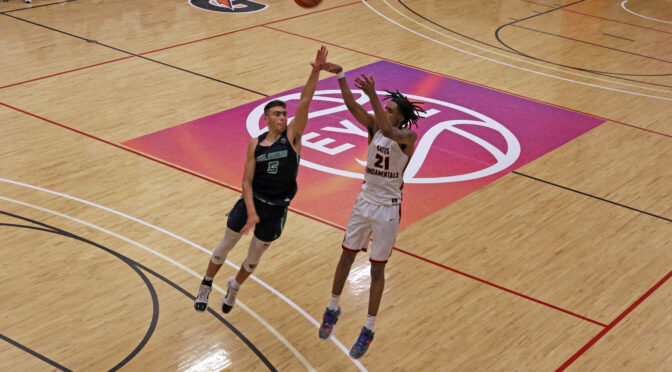 Early against Michigan on November 11th, former Memphis and current Eastern Michigan star guard Emoni Bates worked without the ball. On one out of bounds play in particular, he re-set and hit a jumper from the corner. His long range stroke has continued to improve or at least remain intact.

Bates is more of a quick than high-riser. This aids above average foot speed in the open floor (1st Half/17:42, UM ’22). That burst actually enabled him to finish a follow dunk in the lane (1st Half/6:48, UM ’22) and cut to the basket (one-hand dunk) in the second half. His overall width can make up for any deficiencies in terms of true bounce.

Dating back to his prep level playing days, the range has always gone well beyond the arc. He hit a 25-footer from the wing against Michigan.

During the first half of this contest, Bates actually was part of an Eastern Michigan squad that led the 22nd-ranked Wolverines at one point. There were fallaway jumpers off one foot, step back three-pointers from 28 feet and drives to the basket through contact.

A strong suit in his game revolves around handle. It is more reminiscent of a 6-foot-1 guard than 6-foot-10 wing player.

There have been more stretches this season where Bates has played within the scope of the offense. It is important to remember that he skipped his senior year of high school. The inaugural season at Memphis basically represented his senior year after re-classifying to the 2021 recruiting cycle.

After a tumultuous 2022 offseason that featured a number of off the court headlines, Bates has settled down.

Playing with one of his old teammates from the Bates Fundamentals AAU squad could be part of the positive acclimation to the MAC.

But starting a season fast isn’t anything new for Bates. As a freshman at Memphis in 2021-22, he began the year by making 50-percent of his first 18 three-point attempts (three games).

And the rest of the season?

Bates connected on just 27.5-percent of the remaining 58 three-point attempts.

He was marginally effective as a free throw shooter, did not distribute the ball efficiently and turned the ball over too often in his minutes on the floor. Increasingly, he relied on low percentage shots.

In the four games since the breakout Michigan performance, some of those trends have reappeared. The three-point shooting has not slowed down at all, as Bates continues to connect at nearly a 45-percent clip. Prior to his collegiate years, Bates was at least a competent distributor. Increasingly, the Eagles (1-5) use him as both an on or off the ball performer.

The results have not always yielded succinct ball distribution.

In fact, he has a nearly a one-to-three turnover-to-assist ratio (1:2.8) through five games.

Defensively, he continues to be a work in progress. Getting stronger will be a key for Bates as he transitions to the next level. Injuries were a major part of the inconsistent freshman season at Memphis.

Overall, the first five games of the year for Bates has shown notable strides, but there is still work to be done.

But the most important part of the progress may very well be defined by how those around him have accepted him.

“He wanted to come here because he felt at home, he felt comfortable, he felt connected to his teammates,” Eastern Michigan head coach Stan Heath said. “All those things matter. Fit matters. When players choose schools, they should go where they fit.