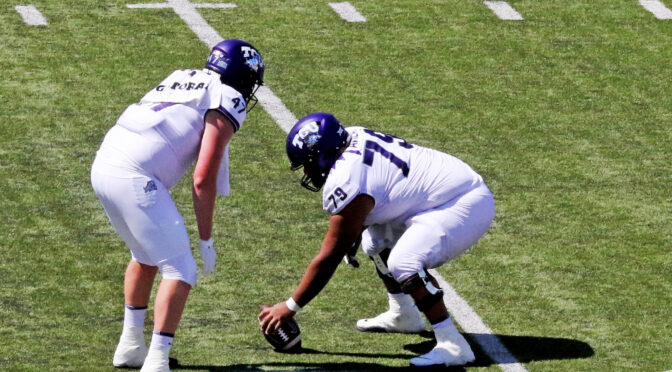 The TCU running game has been on fire this year and part of the reason revolves around the team’s interior offensive line. Led by Esteban Avila (6’4 339) and SMU transfer Alan Ali (6’5, 300), there are a number of possibilities down-to-down with their inside run schemes.

Earlier in the third quarter, Avila flashed an adequate ability to get out in front for Demercado on a screen pass that netted a big gain for the Horned Frogs. On the play, Avila hit a moving target in space (LB Shanon Reid) to open up hidden yardage for Demercado.

Both of these plays occurred while Avila manned the left guard spot.

When Ali left the game briefly in the third quarter due to injury, Avila slid over to the center position. This is the spot he started at during his second-team All-Big 12 campaign as a junior. As a left-handed snapper, he is most comfortable in pass protection going left, but his overall awareness remains more than satisfactory at the position.

The question for NFL teams will inevitably revolve around his projection in zone-based run schemes. The Horned Frogs All-Big 12 lineman most likely projects in a man blocking scheme due to a few hiccups reaching opponents laterally on a consistent basis. With that said he started at all three interior line spots as a sophomore in 2020. The theme has continued thus far in 2022.

The four-year starter gobbles up defenders half or equal to his size and -once he gets his hands on the opposition- can be tough to dislodge from down-to-down. The quick hands alternate when punching while sitting down to anchor. His trunk strength and bulk frequently wins for him in the elevator battles without having to jump around to catch his opponents.

As is typical of most Horned Frogs, Avila showcases voracity on the field.