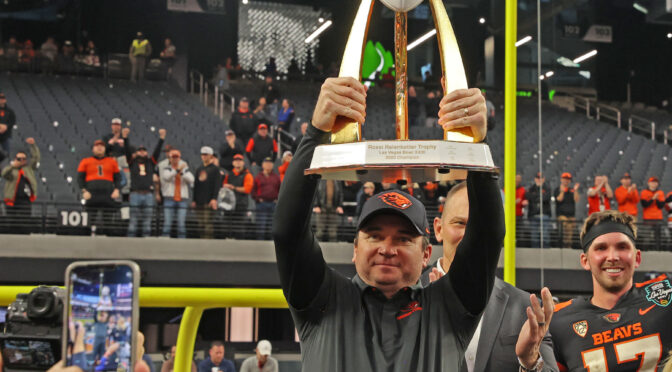 The 2022 Las Vegas Bowl was largely dominated by an Oregon State Beavers (10-3) squad seeking its first 10-win campaign since the 2006 season under then-head coach and 2022 USFL Coach of the Year Mike Riley. Prior to that, the team’s current head coach, Jonathan Smith, quarterbacked the Beavers to an 11-1 record and 2001 Fiesta Bowl victory over the Notre Dame Fighting Irish.

The Beavers had 24 first downs to the Gators 13, scored on five of its six Red Zone scoring attempts and converted seven-of-12 third down opportunities in a resounding 30-6 victory in Allegiant Stadium.

But when asked to compare the current team to the one in which he passed for a career-high 2,773 yards and 20 touchdowns at the beginning of the century, the 2022 Pac-12 Co-Coach of the Year was having none of it.

“Ahhh…yeah,” Smith said in an aw-shucks manner while laughing . “I’m not going to be a smart aleck now. I think that both those teams had really good players on it and, again, special years on both instances. Really happy with this team. I’ll leave it there.” 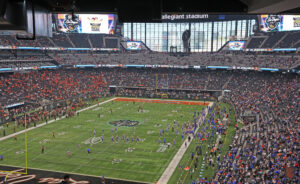 Allegiant Stadium was the home of the 2022 SRS Distribution Las Vegas Bowl.

Oregon State fans made the trek from Corvalis, Oregon to support the team in the 2022 Las Vegas Bowl. 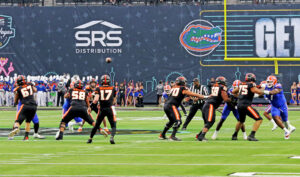 The Oregon State offensive line, led by senior right guard Bradnon Kipper (No. 68 pictured) provided protection throughout the contest. The line led a team that rushed for 164 yards and three touchdowns. 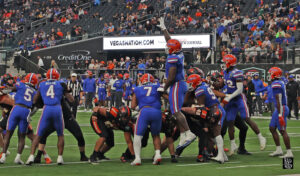 Florida defensive tackle Gervon Dexter (No. 9 pictured seen getting his hands up on a field goal block attempt) finished the 2022 campaign with 55 tackles, two quarterback sacks, four tackles for loss and one interception. 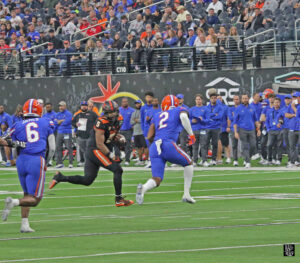 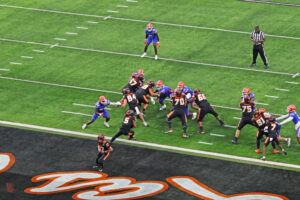 Fenwick (No. 5 pictured) often found the cutback lanes behind the double team blocks of Kipper (No. 68 pictured) and center Jake Levengood (No. 70 pictured). 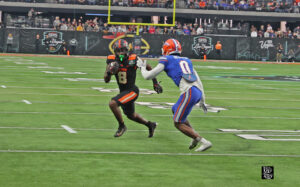 Trey Dean III (No. 0 pictured) attempts to tackle Oregon State running back Jam Griffin during the fourth quarter of the 2022 Las Vegas Bowl. 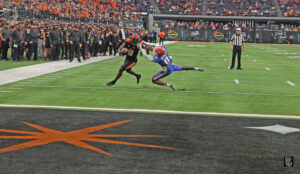 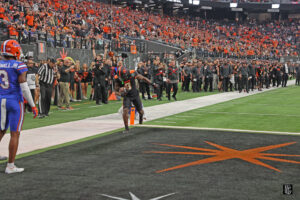 Jam Griffin (No. 8 pictured) scores his seventh touchdown of the year in the 2022 Las Vegas Bowl. 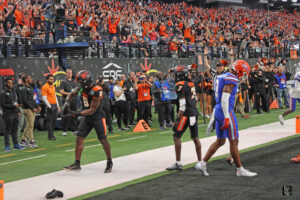 Griffin (No. 8 pictured) does the Gator Chomp after putting the Beavers up 30-0 against Florida in the fourth quarter of the 2022 Las Vegas Bowl. 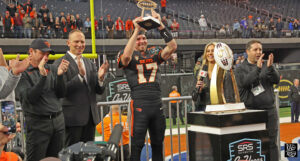 Oregon State redshirt freshman quarterback Ben Gulbranson threw for 165 yards (63%) and one touchdown. The 2022 Las Vegas Bowl MVP also rushed for a touchdown in the contest. 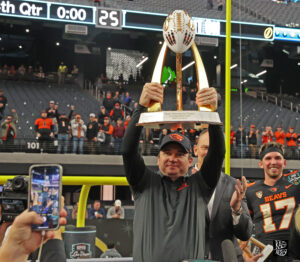 Oregon State head coach Jonathan Smith (seen holding up the 2022 Las Vegas Bowl trophy) became the first coach to lead the team to a 10-win season since Mike Riley back in 2006.