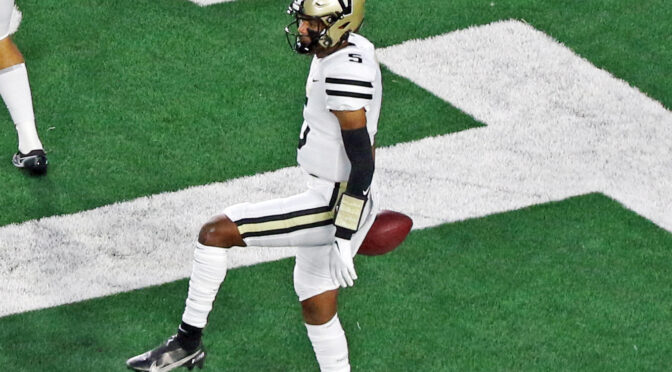 The 2022 season couldn’t have started out any better for Vanderbilt quarterback Mike Wright. After ending the prior season with respectable performances against Missouri, Ole Miss and even Tennessee, Wright was named a team captain prior to the year.

His foot speed, decision-making and improved passing fundamentals all stood out during the team’s summer training camp. It was during that time that he held off a strong push from former starter Ken Seals and highly-touted incoming freshman A.J. Swann.

In Vandy’s season opener, Wright accounted for four total touchdowns, with two coming on the ground and two via the airwaves. He led the team’s postgame celebration and it was on to the next week against Elon. In that contest, he delivered with a career-best four touchdown passes to go along with two more on the ground. Perhaps most encouraging was the touch he showed on a 75-yard touchdown pass to true freshman speedster Jayden McGowan in a 245-yard passing performance.

At the time the Commodores were beginning to pick up steam as a much-improved offense with Wake Forest coming to town. On a wet, rainy afternoon, Wright struggled in the first half with turnovers and inaccuracy throwing the ball. He was benched in the second half and his number was called sporadically over the next five weeks as Swann (who threw two touchdown passes in the second half vs. Wake Forest) held onto quarterbacking duties.

Down 17 points against Missouri, Wright came off the bench for an injured Swann to lead one touchdown drive in a three-point loss.

He also came off the bench for an injured Swann against South Carolina, throwing for 145 yards and one score.

Fast forward to the contest versus the 24th-ranked Kentucky Wildcats just a couple of weeks ago.

Swann was no longer in the lineup due to the aforementioned injuries and Wright got the start.

Reminiscent of the rainy afternoon versus Wake Forest -although much colder overall- and Wright had a chance to erase any memories from that early season outing. He led the team to a game-winning drive with just 32 seconds remaining and finished it off with an eight-yard touchdown pass to Will Sheppard. His most impressive throw on the drive may have been an incomplete corner route to Sheppard versus man coverage on a third down. He came back on the subsequent fourth down (4th and 11) to make a clutch downfield 40-yard throw to wide receiver Quincy Skinner, Jr.

Wright also found time to rush for 126 yards in this contest, which included a 59-yard touchdown scamper in the first half. On that run, the 21.8 200-meter sprinter’s speed brought back memories of his 87-yard jaunt against Hawaii in the team’s opener.

Last weekend, he helped author an upset versus the Florida Gators on the strength of three touchdown passes.

Despite not starting for much of the season, the Georgia product has thrown 12 touchdowns to just four interceptions. In addition, he has averaged 7.4 yards per rush on 63 carries (5 TDs).

His 17 total touchdowns are the most from a Vanderbilt quarterback since 2018.

In a day and age where the transfer portal is often the fastest option for many collegians, the speedy Wright decided to slow down and play the long game. When a second opportunity arose, he sprinted through the finish line with an unabated confidence and calm.

As a result, the Commodores captain has a chance to accomplish something only six other quarterbacks (Whit Taylor, Chris Nickson, Mackenzi Adams, Jordan Rodgers, Larry Smith, Kyle Shurmur) have had a hand in over the last 40 years…lead the team to a bowl game.

Perhaps this team will be the third.

And he will operate against another backup quarterback in former Michigan signal-caller and new Tennessee starter Joe Milton III.

Or did Wright ever think he was the backup?

After the team’s opening victory versus Hawaii, Wright said, ““Winning is hard,” he explained. “That’s what we want to be this year, and we just took a growing step today.” (https://www.saturdaydownsouth.com/vanderbilt-football/mike-wright-on-vandys-blowout-win-over-hawaii-thats-just-vanderbilt-football-this-year/).

The next step could very well lead to a bowl game if he can find a way to lead his team to another ” hard” victory over the nation’s 10th-ranked team in the Tennessee Volunteers.

In any case, his insertion back into the team’s starting lineup has come Wright on time for the Commodores.