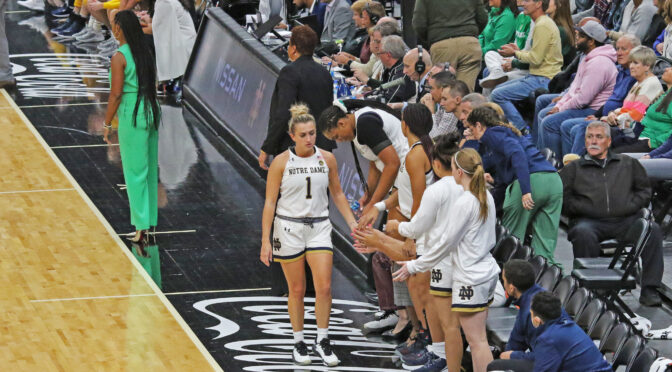 The early portion of the Notre Dame’s women basketball season has been all about fine-tuning things for a challenging December schedule.

Over the next two weeks, they face national power UConn and the 14th-ranked Maryland Terrapins. UConn shooting guard Azzi Fudd, the number one recruit in the class of 2021, averaged 30 points per game through the season’s first three contests. The Huskies have five players averaging in double figures.

None are as dangerous as Fudd, however, who has developed a lethal ability to stop her dribble and pull up in the mid-range game. Her quick release means defenders have to close out in a hurry when she shoots from beyond the arc. Fudd sees the floor well and finds her teammates with bounce or chest passes in transition. Her euro step going left is complemented by an ability to finish with her left hand going to the cup.

The Huskies will use high post back screens to free Fudd up cutting to the hoop (2nd QTR/3:17, Texas ’22). She finishes well near the rim.

But it is her three-point shooting prowess that Notre Dame has to contain. She will most likely be the best guard they’ve faced since 2021-22 Pac-12 Freshman of the Year (media) -Cal’s Jayda Curry- put up 24 points on them in a 90-79 victory earlier this month. In that contest, Curry hit on 44-percent of her nine three-point attempts and the Golden Bears knocked down 41-percent of their 22 three-point attempts.

Maryland is led by first-team All-Big Ten guard Diamond Miller. Miller, a former New Jersey Gatorade Player of the Year, actually committed to Maryland despite interest from Notre Dame during the recruiting process. Miller was also one of the nation’s top recruits back in 2019.

She runs the floor in transition, attacks defenders going to her right or left and finishes with strength around the basket. In addition, she is a factor cutting to the basket in the team’s half-court sets. Miller was named the Big Ten’s Player of the Week after scoring 32 points and putting up 10 rebounds versus Baylor on November 20th. Miller is shooting a career-high 40-percent from beyond the arc. It has been a bounce-back year for Miller thus far.

Before they get to either of those battles, the Fighting Irish have a tall task with Arizona State (4-0) this Saturday.

Notre Dame allows opponents to hit just 34-percent of their field goals through four games. Their guards rebound the ball extremely well and have for the past two seasons. Maddy Westbeld leads the team with two blocked shots per game and 6-foot-1 sophomore guard Sonia Citron -the 2022 ACC Freshman of the Year- leads the team with nearly eight rebounds per game.

On the offensive boards, they are led by former Longhorn center Lauren Ebo. The former Penn State Nittany Lion started 30 games for Texas in 2021-22 and scored in double figures 13 times. Against California earlier this season, she posted eight points, three offensive rebounds and made all six of her free throw attempts before fouling out. She had five turnovers in the contest.

The Fighting Irish have a backcourt that complements each other well. First-team All-ACC guard Olivia Miles is a slasher who is still trying to gain a level of consistency shooting from beyond the arc. She runs the floor well, finds teammates with vision and wrecks havoc defensively. Through five games, Miles -the team’s leading scorer- was averaging three-and-a-half steals per contest. Turnovers have been an issue for Miles, as she averages less than a 2-to-1 (1.88:1) turnover-to-assist ratio.

If you’re looking for an equalizer, it would have to be Notre Dame point guard Dara Mabrey. She is savvy, competitive and never afraid to take the big shot. The former Virginia Tech Hokie is a 39.5-percent career three-point shooter and ranks as nearly automatic from the free throw line (84-percent career). Turnovers have also been an issue at times for Mabrey.

Head coach Niele Ivey is beginning to put her stamp on the program after following legendary head coach Muffet McGraw. The team’s combination of young talented players like Westbeld (2021 ACC Freshman of the Year), Miles and Citron complement a tough mix of veteran transfers in Ebo, Mabrey and Kylee Watson (Oregon). Could the recipe take the Fighting Irish from last year’s Sweet 16 appearance to a Final Four appearance in 2023?

The upcoming tests this month could provide some clarity.