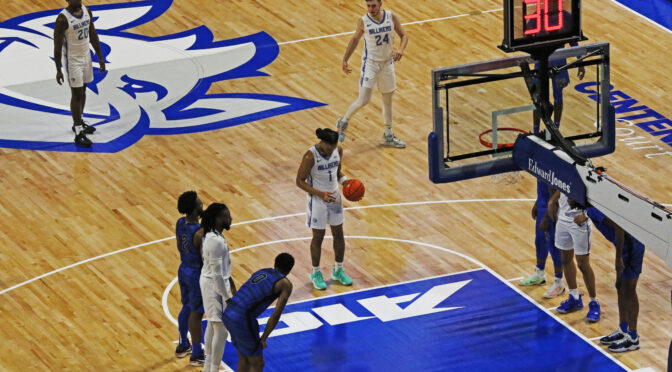 St. Louis Billikens point guard Yuri Collins -the nation’s assist leader through five games- has improved his assist-to-turnover ration in his third year on campus. His best performance came against Memphis earlier this month, when he produced 22 points and nine assists in the team’s home upset of the Tigers.

He has been nearly automatic from the stripe (81-percent), but has surprisingly taken a step back shooting from long range (27-percent). Collins, a first-team All-Atlantic-10 performer in 2021-22, led the NCAA in assists per game as a sophomore (https://www.ncaa.com/stats/basketball-men/d1/current/individual/605).

So how does he get it done?

Generally, it starts with allowing the game to come to him. Rarely out of control on the floor, he changes speeds as a ball handler to draw defenders. In many of these instances, Collins already has an outlet in mind.

His entry passes (particularly bounce passes) are accurate and offer his low post options to catch the ball in rhythm on the way up to the cup.

People are beginning to take notice of his multi-faceted skill-set, but none one is more grateful his own head coach, former Kentucky point guard Travis Ford to have him back in the mix.

“(It was) an incredible phone call. It was a great feeling,” Ford said about talking to Collins after he had made the decision to return. “We talked, and when I hung up there was a celebration in the office, no question. We’re so excited that he’s going to be running our team, as he should be.” (https://www.ksdk.com/article/sports/college/slu/slu-point-guard-yuri-collins-returns/63-244b5ce3-5937-4aa5-8690-9352cad281e9).

Many remember Ford from his time at Kentucky as a starting point guard in the early 1990s after transferring from Missouri. At the time, he set a single-season record for three-point field goals at Kentucky on his way to All-SEC honors.

As for Collins, he can be posted up by taller personnel on the low block (see McCadden, 1st half, Memphis ’22) if caught with an unfavorable switch during half court possessions.

The 6-foot frame could become a problem for him defensively in certain matchups, although he does compete favorably on that end of the floor.

His range does not allow him to shoot with a quick trigger release, so the team often sets ball screens for him to attempt some of those shots from the wing (2nd half, left wing, Memphis ’22).

The postseason will be huge for the senior point guard if he decides to enter the NBA Draft. If he can prove capable of hitting consistently from outside to extend defenses, then his NBA prospects would increase three-fold.

If not, then he may be regulated to playing overseas, but the floor general plays with a calm that definitely creates some future possibilities.

In fact, he went through the NBA evaluation process a year ago before deciding to come back for the 2022-23 campaign.