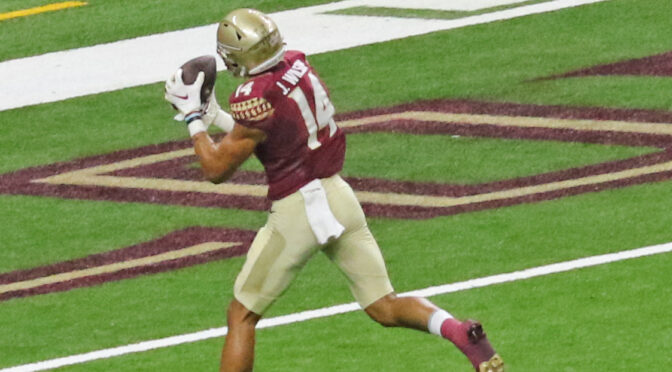 The Florida State Seminoles (4-1) lost a hard-fought 31-21 contest to the Wake Forest Demon Deacons (4-1) last weekend, but it did not take away from the early season performance of wide receiver Johnny Wilson (6’7 235). The Pacoima, California native and Arizona State transfer had limited productivity for the Sun Devils due to a 2021 hamstring injury.

Wilson’s touches go back-and-forth depending on the team’s game plans from week-to-week. What doesn’t get noticed is the blocking downfield that has been at least adequate through five games. This provides him with possibilities as an F or H-back-type for the next level.

It has not all been perfect.

In some of those cases, Wilson has overrun crack block opportunities versus safeties (see vs. Burns, 3rd QTR, LSU ’22). In addition, the former Sun Devil was unable to corral a potential slant-and-go touchdown grab in the end zone versus the cornerback when LSU safety Jay Ward knocked the ball out of his hand (3rd QTR, LSU ’22).

Those missed chances do not erase the numerous pass interference penalties he has drawn versus quick, fluid cornerbacks (see Clark, Louisville ’22). The stride length (five yards in first three steps) presents different pictures for cornerbacks. Wilson tallied nearly 150 yards in this contest (7 receptions, 149 yards, TD vs. Louisville ’22). He turned around Cardinals safety Kenderick Duncan, Jr. on a post route that led to a 69-yard catch-and-run. His full extension high-point touchdown grab in the fourth quarter versus cornerback Jarvis Brownlee, Jr. was artistic. All three of his touchdowns this season have come in the fourth quarter.

There are still some high-level opponents for him to overcome the rest of the year. NC State’s defense should provide one-on-one opportunities if they commit to stopping FSU’s powerful ground game. Can they shut down the Seminoles three-headed monster of running backs Treshaun Ward, Trey Benson and Lawrance Toafili? The trio has combined for nine rushing touchdowns. Conversely, the Wolfpack defense is allowing a measly 3.4 yards per carry and ranks 15th nationally in rushing defense (as of 10-3-22).

If so, then Wilson’s size and catch radius have to win in isolation on the outside for the Seminoles. Perhaps surprisingly, FSU ranks 35th nationally in passing offense (278 YPG) thus far in 2022. This represents nearly a 77-yard improvement over last season’s final totals. Wilson’s 18.8 yards per reception (19 catches) certainly ranks as a big part of the team’s sudden resurgence through the air.

Tomorrow’s performance could bring more spotlight for the budding star in Tallahassee.