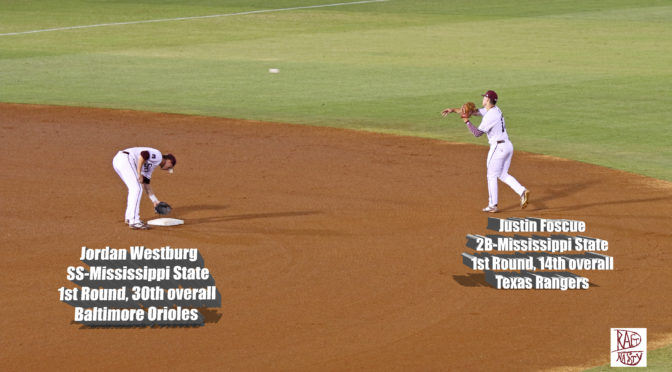 The first night of the 2020 MLB Draft featured a number of collegiate players who dominated the early portion of the draft, prior to the prep level ranks entering the second half’s fray with an impact. Mississippi State’s middle infield of second baseman Justin Foscue and shortstop Jordan Westburg, pictured, were just one of two pairs to hear their names called on the draft’s first night.

2. Baltimore Orioles: Heston Kjerstad OF-Arkansas
We spotlighted Kjerstad’s underrated fielding skills, but this pick is all about the former Razorback’s bat speed. After working his way up through the minor league ranks, he will be expected to compete for a batting title at some point in his career. Kjerstad batted .448 in 16 games this past season.

3. Miami Marlins: Max Meyer RHP-Minnesota
Right-handed flame thrower has all of the tools to be an effective major league closer, but he is the rare 6-foot pitcher with enough gas to start. A viable comparison would be two-time All-Star Sonny Gray.

4. Kansas City Royals: Asa Lacy LHP-Texas A&M
The Royals have used three first-round picks on college arms three years ago. And they add the highest draft pick in Texas A&M history to the mix in 2020.

5. Toronto Blue Jays: Austin Martin 3B/OF-Vanderbilt
What can’t Martin do? Aside from playing two positions in the infield, he also found time to star in center field this past season.

6. Seattle Mariners: Emerson Hancock RHP-Georgia
Widely regarded as the top right-handed pitcher in the draft, Hancock previously a 38th-round pick of the Arizona Diamondbacks in the 2017 MLB Draft. He brings heat in the 95-MPH range.

7. Pittsburgh Pirates: Nick Gonzales SS-New Mexico State
Gonzales has a diverse skill-set that allows him to spray the ball to all parts of the field. Will the former walk-on project to shortstop or second base in the pros?

8. San Diego Padres: Robert Hassell III OF-Independence HS (Tenn.)
Hassell III pitched in high school but his bat makes him a legitimate candidate to win an outfield job eventually in the major leagues. The Tennessee native will now relinquish his scholarship to Vanderbilt and directly head to the major leagues. He was a two-time Tennessee Gatorade Player of the Year.

9. Colorado Rockies; Zac Veen OF-Spruce Creek HS (Fla.)
Veen’s bat could one day annihilate the altitude in the Rocky Mountains, but his foot speed should not be discounted (averaged over a stolen base per game in ’20). Nor should his arm, which could play well in either left or right field.

10. Los Angeles Angels: Reid Detmers LHP-Louisville
For Detmers, it is all about location and a ‘nasty’ breaking ball. He may be able to save his arm with his plethora of off-speed pitches. The former Cardinals standout was the ACC’s Pitcher of the Year in 2019.

11. Chicago White Sox: Garrett Crochet LHP-Tennessee
His health has been somewhat of a concern, but the 6-foot-6 left-hander has a very difficult delivery for batters to adjust to if seeing him for the first time. It becomes even more of a challenge when he gets his fastball up into the 100 miles per hour range.

12. Cincinnati Reds: Austin Hendrick OF-West Allegheny HS (Pa.)
Despite not playing a single game in 2020, the Pittsburgh native still found his way into the draft’s Top 15 picks. His toe tap at the plate has been a big part of the discussion. Hendrick won the MLB High School Home Run Derby with 14 home runs during the 2019 All-Star weekend in Cleveland.

13. San Francisco Giants: Patrick Bailey C-NC State
The last catcher taken from NC State was former third-rounder Jack Conley, but Bailey ranks on another level. The former Minnesota Twins 37th-round draft pick (2017) is known for his defense, but the switch hitter was on his way to career-highs in every offensive category prior to the 2020 season being cut short.

14. Texas Rangers: Justin Foscue 2B-Mississippi State
The 2019 first-team All-SEC performer pulls the ball and has experience at both second base and the hot corner.

15. Philadelphia Phillies: Mick Abel-RHP Jersuit HS (Ore.)
The former Oregon Gatorade Player of the Year did not necessarily standout during the summer of 2019 for USA Baseball’s 18U squad, notching an alarming 8.31 ERA. The 6-foot-5 right-hander carries a fastball, changeup and slider, however, in his arsenal.

16. Chicago Cubs: Ed Howard SS-Mount Carmel HS (Ill.)
It is all about defense for Howard, who still has much room for improvement at the plate. The 6-foot-2, 191-pounder did bat .419 as a junior while earning Class 4A All-State honors. He committed to Oklahoma during his sophomore year. He becomes the first high school player the Cubs have taken in the first round in nearly a decade.

17. Boston Red Sox: Nick Yorke 2B-Archbishop Mitty HS (Calif.)
Prior to the draft, it seemed like a lock that Yorke would end up as an Arizona Wildcat, where he was committed to play. The Red Sox, however, liked his ability to produce runs at the prep level, despite just average speed (7.0-60-yard dash, 1.81 10-yd split) and injury concerns.

18. Arizona Diamondbacks: Bryce Jarvis RHP-Duke
Jarvis averaged over a strikeout per inning in 2020, effectively building off the momentum of a 2019 NCAA regional MVP performance during his sophomore season. In fact, he nearly stopped Vanderbilt’s 2019 national championship run with a masterful performance in the Nashville Super Regional. His father, Kevin, won 34 games during his major league career for 11 teams.

19. New York Mets: Pete Crow-Armstrong OF-Harvard-Westlake HS (Calif.)
Crow-Armstrong impressed in the field last summer for the 2019 WBSC U-18 squad. Teams were excited to see him play this spring but were forced to rely on junior film. He clocked in the 6.51 range in the 60-yard dash last summer and had previously committed to Vanderbilt.

20. Milwaukee Brewers: Garrett Mitchell OF-UCLA
Mitchell has always been known for his foot speed, despite weighing in the 215-pound range. He once ran a blazing 6.35 60-yard dash in a Perfect Game showcase back in 2017. The Bruins starting outfielder scored 18 runs in 2020.

21. St. Louis Cardinals: Jordan Walker 3B-Decatur HS (Ga.)
Walker is a power prospect with potential upside as a corner-infielder or right fielder. The Duke commit earned Georgia Gatorade Player of the Year honors in 2020 despite playing in just 16 games. He also clocked in the 6.56-range in the 60-yard dash.

22. Washington Nationals: Cade Cavalli RHP-Oklahoma
Since he left the high school ranks as a 226-pounder with a 90 MPH fastball, Cavalli has added at least five miles per hour to his fastball, developed a slider and even added a curve ball.

23. Cleveland Indians: Carson Tucker SS-Mountain Pointe HS (Ariz.)
Tucker is a developmental prospect who still has room to grow into his 6-foot-2, 180-pound frame. His flexibility may be his greatest asset as a projected middle infielder. His older brother, Cole, debuted in 2019 for the Pittsburgh Pirates after going in the first round of the 2014 MLB Draft.

24. Tampa Bay Rays: Nick Bitsko RHP Central Bucks East HS (Pa.)
A reclassification for the 2020 MLB Draft, Bitsko has experience at first base, third base and in the outfield. However, the Virginia commit’s value lies in his upside on the mound.

25. Atlanta Braves: Jared Shuster LHP-Wake Forest
He got better and better as his career went along after not getting drafted out of high school. While this pick may rank as a surprise to Braves fans, he improved his control and the fastball continues to gain heat.

26. Oakland A’s: Tyler Soderstrom C-Turlock HS (Calif.)
Lefty batter who stands 6-foot-2, 200 pounds with questions about his defense. The 2020 California Gatorade Player of the Year could end up as a corner infielder in the pros because of his power upside.

27. Minnesota Twins: Aaron Sebato 1B-North Carolina
At 6-foot-2, 240 pounds, the 2019 ACC Freshman of the Year and draft-eligible sophomore combines major power with a right-handed bat that projects well to the first base position. Despite playing in limited games this year (2020), he notched seven home runs after smacking 18 in 2019. Can he connect versus off-speed pitches?

28. New York Yankees: Austin Wells C-Arizona
Wells has above average speed for a catcher and has the left-handed batter has produced with a wooden bat. The 6-foot-2, 220-pounder contains positional versatility. The former Bishop Gorman HS (Nev.) product hit .375 in 2020.

29. Los Angeles Dodgers: Bobby Miller RHP-Louisville
The ball is difficult to pick up off the hand of the former 38th-round pick by the Baltimore Orioles in 2017. His heat gets up to the 97-98 MPH mark on his fastballs and he has a satisfactory slider

30. Baltimore Orioles: Jordan Westburg SS-Mississippi State
The 6-foot-3, 203-pounder is a solid contact hitter with enough speed and arm strength to play the left side of the infield. His productivity in the Cape Cod League bodes well for his future prospectus.

31. Pittsburgh Pirates: Carmen Mlodzinksi RHP-South Carolina
He broke his foot in 2019 but he was cleared and finished with the second-most strikeouts in the Cape Cod League. The South Carolina native projects as a ground ball pitcher due to his mid-90s fastball and effective slider.

32. Kansas City Royals: Nick Loftin SS-Baylor
He doesn’t strike out a lot and he has the ability to turn on inside fastballs. Perhaps his biggest strength is his ability to potentially play multiple positions, as he did for Team USA in 2019.

33. Arizona Diamondbacks: Slade Cecconi RHP-Miami (Fla.)
The Oviedo, Florida native carried a mid-90s fastball coming out of the high school ranks and has since added even more sauce. He was a good enough prep level athlete to have played multiple positions at 6-foot-4.

34. San Diego Padres: Justin Lange RHP -Llano HS (Tex.)
Lange can consistently get up into the 93 MPH zone with his fastball and has even touched triple digits. He still has room to grow into his 6-foot-4, 190-pound frame. He originally committed to play at Dallas Baptist University.

35. Colorado Rockies: Drew Romo C-Woodlands HS (Tex.)
The switch-hitting catcher was known most for his defense, but he has shown marked upside when batting from the left side of the plate. The LSU commit may have gone even higher with a full season of high school baseball in 2020.

36. Cleveland Indians: Tanner Burns RHP-Auburn
After fading late in 2019, scouts were interested to see if the fiery Burns could maintain his hot start for a full season in 2020. This was particularly the case after shoulder issues were a big reason for his sophomore year fade.

37. Tampa Bay Rays: Alika Williams SS-Arizona State
It was always about the glove for Williams, despite just pedestrian arm strength. If he doesn’t pan out at shortstop, he has a solid fallback plan at second base.

Note: The Houston Astros forfeited their first round pick in the 2020 MLB Draft due to the team’s sign-stealing scandal.