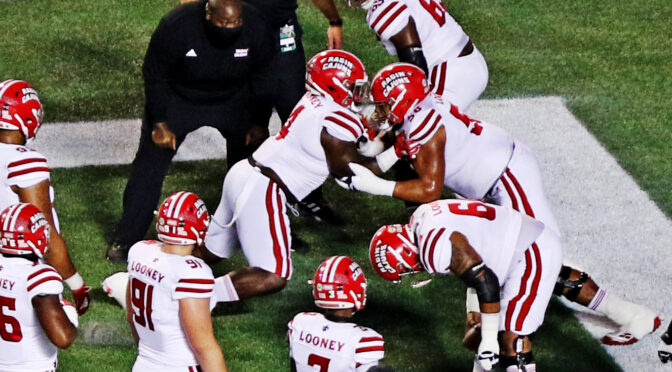 It is not often that a player changes his name. In Zyon Hill’s case, the Father’s Day change to the new name (nearly a half-year ago) was an ode to his stepfather. Chris Green had been raising Hill since he was one years old.

On the field, there haven’t been many alterations for the 6-foot, 290-pounder’s game. He has always played bigger than his size and that has resulted in a number of challenges over time.

But there is more on the line for Hill-Green.

Over the years, he’s dealt with a bevy of scrapes and bruises that have forced some missed starts. In 2021, he even missed time due to a lower body injury.

“His career here started with an injury…..in the summer when he got here,” ULL-head coach Michael Desormeaux said. “It seems like for him it’s been battling that, managing that and pushing through those things his whole career. Our kids see him every day, they know the shape that he’s in after a game.” (https://ragincajuns.com/news/2022/10/31/football-michael-desormeaux-press-conference-oct-31-2022.aspx).

It has truly been a full body experience for the sixth-year Super Senior.

Despite the setbacks, Hill-Green’s school-record 21.5 career quarterback sacks have come due to a combination of quickness, lower body torque and endurance. Frequently, he has been at his best late in games (see Georgia Southern ’20).

The former Catholic High School (La.) product plays like he weighs at least 20-to-30 more pounds with the heavy-handed approach taking on guards or double teams. Not only does he fight versus double teams, but he can win by playing to half a man as a pass rusher. All in all, it has resulted in an impressive total of 33 tackles for losses. Hill-Green is a big reason the team has played in four conference championship games the last four seasons.

It is a not a fact that gets lost on first-year Louisiana head coach Michael Desormeaux, who himself put up two 1,000-yard rushing seasons as a former standout quarterback at the school.

“On the field, it’s easy to see how important he (Hill-Green) is,” Desormeaux explained. “In the run game, the throw game, he’s constantly putting pressure on the quarterbacks. He wins one-on-one battles. He commands a double team and when he doesn’t get one, he’s a problem for the other team.”

And on the days when Hill-Green has not been able to practice due to the myriad of injury hiccups?

“He’s coaching the D-line, the other guys that are in there,” said Desormeaux. “It’s not a day off for him. That’s why he is able to go out and perform at a high level. The guy knows the defense front and back.”

Hill-Green posted just one tackle versus Florida State in a 49-17 defeat last weekend.

Facing a pass-oriented offense this time around against Layne Hatcher and the Texas State Bobcats, can Hill-Green pick up at least a half-sack to break the school record?

Perhaps as long as things get back to normal and don’t change as they did a week ago. 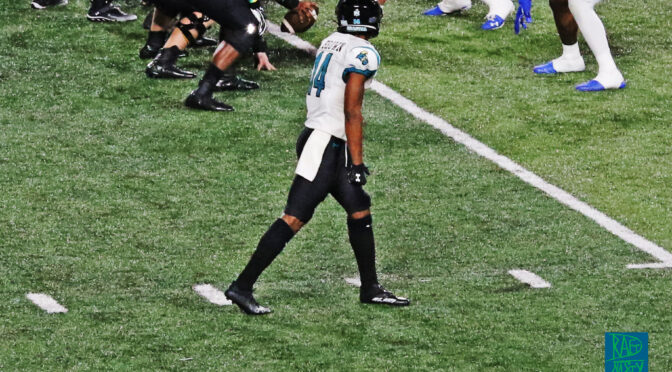 In today’s world of college football, freshmen are often tasked with making an immediate impact. How many can get it done in a variety of ways from a mental perspective?

Quarterback Grayson McCall returned from a late injury against Georgia State the week prior to not only lead the Chanticleers to a 34-30 back-and-forth victory over Georgia Southern, but he did it to the tune of 335 yards passing with 34 more yards on the ground.

For his efforts, McCall was named the Sun Belt Conference Offensive Player of the Week. With just over 10 minutes remaining in the game, McCall threw a 36-yard touchdown pass to senior wideout Tyler Roberts on a post route in-between two defenders to cut Georgia Southern’s lead to 24-21.

So who else was he throwing the ball to?

Enter Jared Brown. His 61-yard touchdown reception versus the Eagles put the Chanticleers 28-27 in the fourth quarter. It was the team’s first lead since the beginning of the first quarter. Needless to say, Head Coach Jamey Chadwell was not surprised.

“He (McCall) pumped to the right, they covered a couple of guys there to the right…he found Jared, we had great protection,” Chadwell explained. “He had a huge pocket that was very clean, and he put that throw right over there and then JB (Jared Brown) has some speed. He outran all those guys.”
——Coach Chadwell Radio Show (October 5, 2022)

Brown came into the season perhaps lightly regarded with the addition of Georgia State transfer Sam Pinckney, who has been no slouch either in his teal and black debut season (28 receptions for 377 yards, 13.5 YPR, TD).

But teams preparing for the Chanticleers have to take notice of the ever-emerging redshirt freshman, currently ranked fourth in the conference in yards per reception through five weeks (20.63).

You don’t know where Jared Brown will line up. On the first play of the Georgia State contest (9-22-22), he lined up at an offset position (shotgun) in the backfield and scored on a 50-yard wheel route reception from McCall up the left sidelines. Later, he outpaced the Panthers defense after receiving a forward pitch from McCall on a 53-yard touchdown reception that was originally scheduled to be a pitch on a triple option.

Two 50-yard plus touchdown receptions in one quarter.

They bring him in motion as part of the team’s triple option spread attack as the pitch element. He comes in speed motion to provide eye dirt for linebackers when they’re running their speed inside zone reads. He lines up outside or in the slot.

Remember that part when we talked about him being a redshirt freshman.

At this point, he is shining in a myriad of roles.

That glow is reminiscent of Jared.

You know, the jewelry.

So far, he’s been a gift for the Chanticleers. 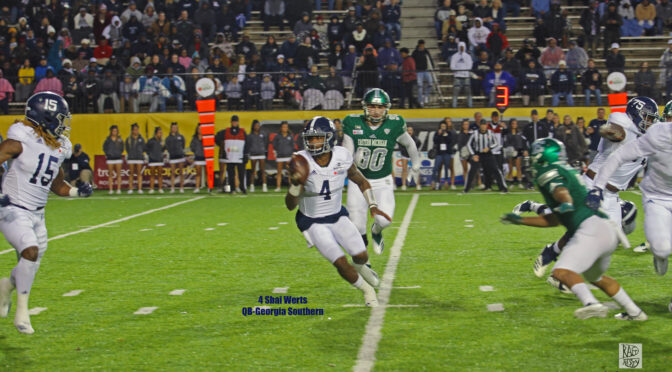