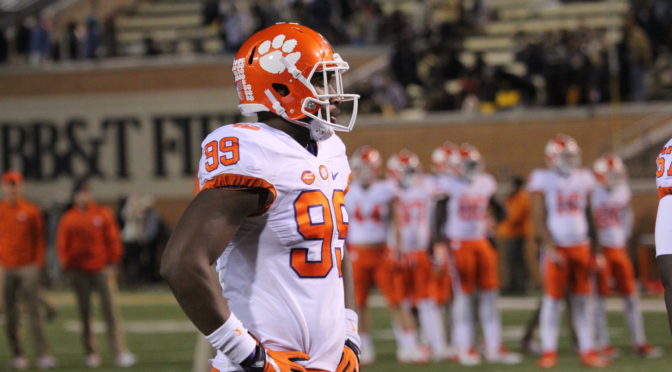 A game that was supposed to feature two Top 25 teams turned into a blowout.  Clemson defeated NC State, 41-7, at home, behind a sensational  performance from their freshman signal-caller. DraftNasty’s Troy Jefferson gives his impressions in this in game report:

Clemson was forced to use sophomore running back and Heisman hopeful Travis Etienne (5’10, 200) as a decoy against NC State, who decided to make Lawrence beat them with the pass. The freshman quarterback indeed did just that.  Lawrence threw for 308 yards and one touchdown while completing 66 percent of his passes.  Most impressively was his ability to spread the ball around and put it in positions where receivers could run after the catch. The Tigers used a steady diet of comeback routes, which required Lawrence to anticipate when his receivers would break off the top of the route.  When they did, he often  threw an accurate ball to the outside shoulder so that the cornerback couldn’t undercut the route.  13 different Tigers caught at least one pass.  Coming into the game, the question was did the Tigers have enough playmakers on the outside.  After a strong performance against a ranked opponent, those questions will be no more. Lawrence has at least two more years of school, but his patience going through his progressions will keep scouts intrigued going forward.

Ferrell didn’t add to his six-sack season total on Saturday, but he did finish with five

tackles, including two for loss.  The junior defensive end displayed an ability to get off the ball in a hurry.  On one run in the third quarter, he met the NC State running back in the backfield for a five-yard loss.  Ferrell is a premier pass rusher (21.5 career sacks) who forces quarterbacks to roll opposite of him because he gets up the field so quick. The Richmond, Virginia native is slated to be a top pick in this year’s draft but like any player with his type of speed, he must make sure he keeps gap integrity. On one play in the second quarter, Ferrell got past his man but was too vertical and NC State senior running back Reggie Gallaspy (5’11, 235) blew right past him.

NC State entered the game with a 61-percent conversion rate on third down, which was the highest mark in college football. However, the Wolfpack finished just 2-of-12 on third downs and totaled 297 yards,  nearly 150 less than its season average. Clemson was too much for the Wolfpack on first and second down, which led to 3rd and longs. The Tigers feature two of the best pass rushers in college football with Ferrell and senior defensive end Austin Bryant (6’6, 280). On the back end, the Tigers have the ability to play in press-man or zone.  Both coverages led to interceptions on Sunday, senior linebacker Jalen Williams (5’10, 210) dropped back in a zone coverage to pick off a pass over the middle while earlier in the game junior defensive back K’Von Wallace (6’0, 195) caught a batted pass for an interception as a result of solid man coverage.  The moral of the story is don’t get down early to Clemson, because their defense has the potential to make opposing offenses pay both with talent and scheme.