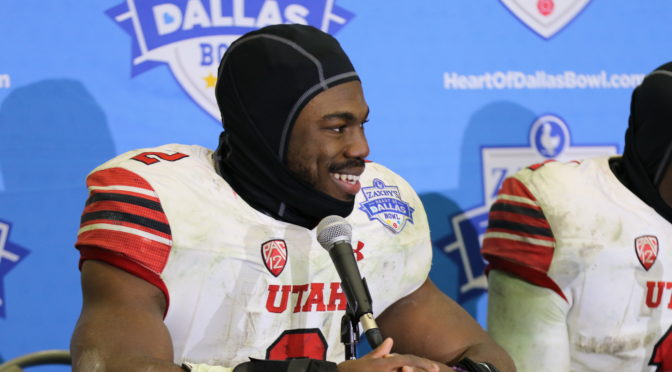 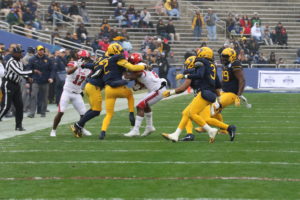 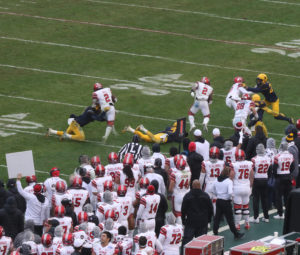 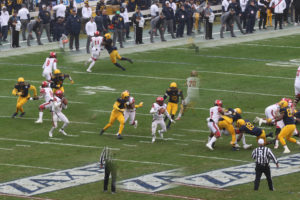 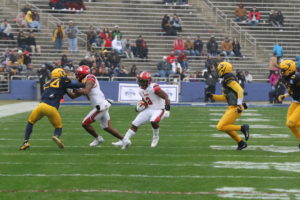 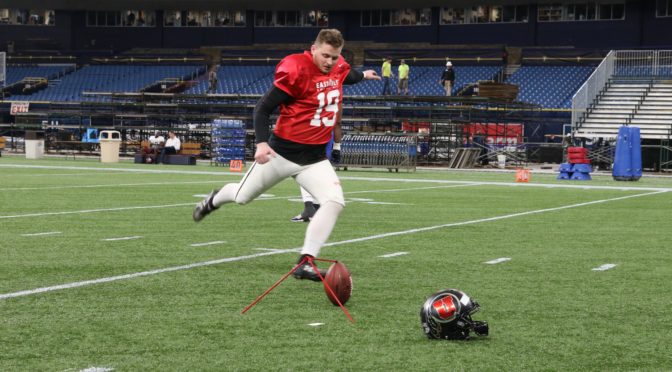 A football and soccer ball have striking differences but none of that seems to matter to this NFL hopeful.

Former Utah Utes kicker Matt Gay played just one season of high school football but after being named a consensus FBS All-American in 2017, he is preparing for the NFL Draft.

“It’s just a fitting ending to the hard work and the risk that I took kind of leaving soccer a few years ago.…and showing it’s paying off. It just shows the next step in the journey to go in the NFL,” Gay said during the week of practice at the 2019 East-West Shrine Game. “It’s a testament to hard work and I just really appreciate the opportunity being down here.”

The former walk-on, who has a 71-percent touchback rate on kickoffs, has been able to translate his strong leg to the gridiron but he does note some technique differences between kicking the different balls.

“Kicking a soccer ball at my position of center forward was about trying to keep the ball low and on goal and now (in football) you have to get the ball up and above blockers,” Gay said.

Another difference Gay noted is most soccer kicks vary depending on the situation but in football every kick should be exactly the same.

According to DraftNasty analysis, Gay keeps an erect upper body on kicks that require power and he keeps his head inside of the football and in-between the plant foot and his kicking platform.

However, the draft prospect still has to shake his soccer tendencies. Gay’s soccer background will occasionally show up and he’ll punch at the ball on some of his longer attempts, like he did on Day 2 of practices during the week of the East-West Shrine game, when he pushed a 58-yard field goal low and to his left from the right hash.

“Sometimes I find myself in a soccer mentality where you punch at it because I’ve done it my whole life,” Gay said. “It’s about getting the repetition in your body to change to certain techniques to make sure the kicks look the same.”

Before transitioning to the gridiron, Gay was a three-time all-state soccer player and a team captain at Orem High School.

From there, he played two years of soccer at Utah Valley, where he earned second-team NSCAA All-West Region honors.

It wasn’t until 2017 when he walked on to the Utah football team during preseason camp that he left the round checkered ball behind.

His acclimation to the oblong ball has been swift. Gay says he is comfortable kicking from 60 yards out and is even confident in himself from as far as 65 yards out.

The relative newcomer to the game of football has also proven he can play in all types of weather conditions.

“Sometimes you get a perfect night early on in the season but we’ve had games in Colorado where it’s raining or the ball is cold and flat. You have to be able to handle it because no one is going to give excuses,” Gay said. “You have to make kicks when it’s snowy or rainy or sunny.”

As he gets more and more comfortable, Gay said he has relied on former Utah Utes and Chicago Bears kicker Andy Phillips.

Phillips was a first-team All-Pac-12 selection in 2014 and was a second-team All-American in 2015 before signing with the Chicago Bears during the 2017 offseason.

Despite being waived by the Bears, Phillips enjoyed a successful career at Utah, where he set the school records in makes (23) and attempts (28) in 2014. However, both of those records have been broken twice over by Gay.

“He’s around all the time, I talk to him and he’s good about giving tips and pointers about staying calm,” Gay said.

The former pupil has turned into a master in his own right. Gay made all 85 of his extra point attempts and was 56-of-65 on field goals during his two seasons in Salt Lake City. The 86-percent success rate ranks him ninth all-time in the NCAA and first in the Pac-12 for kickers who have made at least 50 field goals.

The 24-year-old has also established himself as a team leader and was named a captain for the Utes.

Gay wants NFL teams to know that no matter who selects him they will be getting a kicker who is willing to take his lumps and learn from them.

“Failure teaches you more than success,” Gay said. “In those moments when you fail that’s a big learning lesson. Success is great and enjoyable but you learn more when you fail.”

If his transition from high school and collegiate soccer to winning the Lou Groza Award in college football is any indication, Gay is a quick learner and has the potential to be successful at the next level.