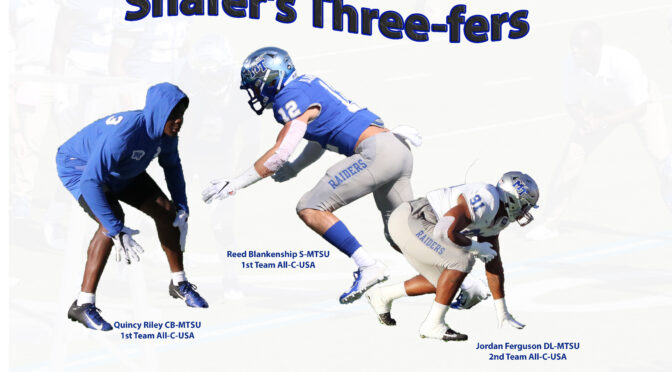 The 2021 CSJ Bahamas Bowl features a number of healthy individual storylines, but perhaps none more so than a three-fers approach for one of the nation’s top defenses. Injuries and improved play have been a theme for both teams heading into the contest. Toledo (7-5), led by first-year starting quarterback DeQuan Finn, reeled off victories in four of its last five games. Middle Tennessee (6-6) rebounded from a 2-4 start by winning four of its final six contests to achieve bowl eligibility. The Blue Raiders eventually settled on freshman quarterback Nicholas Vattiato, a Plantation, Florida native, in its last four games. Today, however, we spotlight one of the game’s top defensive minds and a philosophy that has led to eye-popping results.

Shafer, the former Syracuse head coach, is one of the more creative defensive minds in all of college football. Shafer-led defenses are known for producing turnovers and touchdowns, and they do so on a regular basis. In 2021, his unit has forced a whopping 18 fumbles (T-2nd nationally), recovered 15 fumbles (T-1st nationally) and picked off 16 passes (314 yards, 3 TDs). For good measure, the team has also returned three fumbles for scores. Their six defensive touchdowns are tied for first in all of FBS football with Nevada and Ohio State. One of the reasons? Shafer’s recruiting philosophy. He talks about recruiting three-fers. Three-fers are high school athletes who play three different positions (in football) and three different sports.

So which players on MTSU’s explosive defense have contributed to his unique philosophy?

The first-team All-C-USA safety was a star quarterback at West Limestone High School (Ala.), where he rushed for over 3,000 yards, passed for over 1,000 yards and tallied 1,004 receiving yards. The former state championship basketball player is the unquestioned leader of the defense, combining a coach’s intelligence with positive movement skills. After back-to-back injury-plagued seasons, Blankenship has largely returned to his 2018 form, when he picked off four passes and returned one of the interceptions 100 yards for a score. His angles have been hit-or-miss at times as a tackler, but he typically posts at least one highlight film play per game. Blankenship was forced to miss over 40 days of summer workouts in 2020 due to quarantine for COVID-19, but never tested positive. That absence gave him an even stronger appetite to be around both teammates and coaches, whom he steadily gives credit to both on and off the field.

“It starts off just listening to the coaches,” Blankenship said when asked about his long run of big plays at the school. “It’s all about your teammates on the plays you make.”

He finished third on the team in 2021 with 10 tackles for loss, returned a fumble 90 yards for a score and forced two fumbles. The respect he has for those around him is definitely reciprocal.

The next of Shafer’s three-fers who stood out in 2021 was Riley, a former A.C. Flora High School (S.C.) product with blazing recovery speed.

Riley won the South Carolina Class 4A state track and field championship with a blazing 10.48 100-meter time back in 2019. His confidence on the field allows for him to jump routes early in the down, as UTSA quarterback Frank Harris discovered early in 2021 when trying to throw an out pattern to Riley’s side that he picked and nearly took back the distance.

Injuries have been a bit of a hiccup for Riley, who missed four games in 2021. Technically, he is eligible for the 2022 NFL Draft after having played in three games back in 2019, his first year on campus. During that season, a season-ending injury also thwarted his charge. In fact, the first-team All-C-USA freshman corner posted five interceptions for 153 yards (TD) in just eight games this season. In 2020, prior to injury, he picked off two passes (77 yards) in an All-C-USA freshman campaign.

So what other sport made him one of the three-fers?

“He was a great basketball player in high school,” Shafer said.

Yes. Another player who fits the bill. And in football, he stood out playing wide receiver at the prep level, notching over 300 yards receiving as a senior with six special teams scores.

The permanent team captain rounds out our list on Shafer’s philosophy, although the defense is littered with players who fit the bill. Ferguson is actually tied with another of the three-fers, safety Gregory Grate (5’11, 197, JR), for the team lead in forced fumbles (three). The Cartersville High School (Ga.) product plays a variety of roles for the team, as he aligns at defensive tackle, defensive end and rush outside linebacker. In fact, he has seen time as a personal protector on the punt team.

In high school he was a star tight end, racking up 15 touchdowns as a junior alone. Shafer found him somewhere else.

“He played high school basketball as a kid,” Shafer said. “Great leader. He is capable of playing inside or outside (on the defensive line). Ran practices for the team when we weren’t there.”

The second-team All-C-USA performer certainly was there for the team in 2021, when he notched career-highs in sacks (eight), tackles for loss (16.5), forced fumbles (three) and quarterback hurries (14). In the team’s bowl-clinching win versus Florida Atlantic, he took a fumble return back 71 yards for a score.

The three-fers don’t stop with those three, no pun intended, as second-team All-C-USA linebacker DQ Thomas (80 tackles, 5 QB sacks, 14.5 TFLs, FF, 2 INTs (43 yds, TD), 2 PBUs) was a powerlifter at the prep level. Versus Virginia Tech, he ran down quarterback Braxton Burmeister for a sack and was in on several pressures. The Oxford, Mississippi native is the school’s all-time leader in tackles for loss (51.5) heading into his final career game.

But it all goes back to the former collegiate quarterback drawing up the defenses and his own unique recruiting philosophy. Shafer’s mix of pre-snap defensive movement (involving safeties and linebackers), zone blitzes, six-man pressures, five-man fire zones and multiple looks leads to confusion for opposing offenses.

He credits MTSU head coach Rick Stockstill for being open to his various suggestions during games.

“He’s open to thoughts before, during and after games,” the longtime defensive coordinator said.

And with three head coaches on one coaching staff (Stockstill, Shafer and former Clemson HC Tommy West), perhaps they meet the three-fers philosophy on their own.

After all, as Shafer put it, “there’s nothing we’re afraid to communicate.”