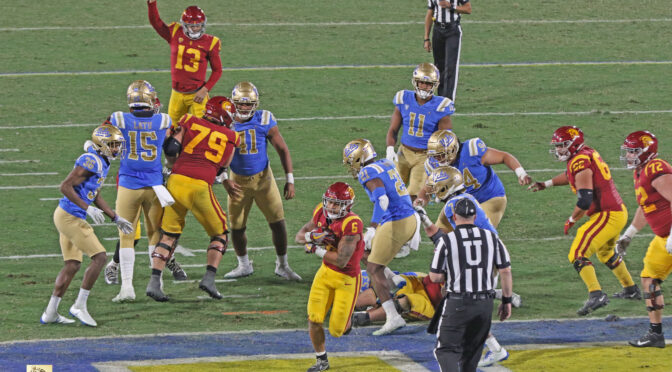 The USC Trojans, led by quarterback Caleb Williams, overcame a 14-point first quarter deficit to win a shootout in the battle of Los Angeles Saturday night.

Williams passed for a career-high 470 yards with two touchdowns and also added another 33 yards (TD) on the ground. His counterpart, UCLA star quarterback Dorian Thompson-Robinson, accounted for six touchdowns (4 PASS, 2 RUSH) but also had four turnovers in the team’s hard-fought 48-45 defeat.

The Trojans (10-1) kept themselves relevant in the race for a potential CFP playoff berth with a huge game coming up against Notre Dame next week. 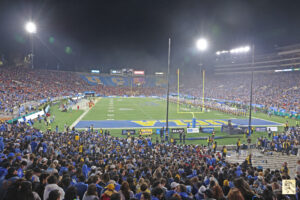 The Rose Bowl had the feel of a big game and the city of Los Angeles turned out to check out all of the stars.

UCLA head coach Chip Kelly and quarterback Dorian Thompson-Robinson share an embrace on senior night for the Bruins. It was the last home game of a five-year run for the coach and quarterback. 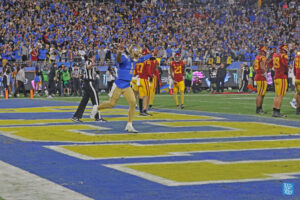 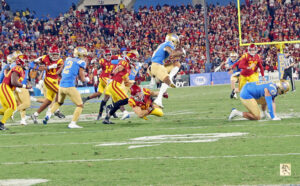 UCLA all-purpose standout Kazmeir Allen (No. 19 pictured) finished with 1,048 all-purpose yards (4 TDs) in 2022. He averaged 24.6 yards per kickoff return this past season after averaging nearly 29 yards per kick return in 2021. 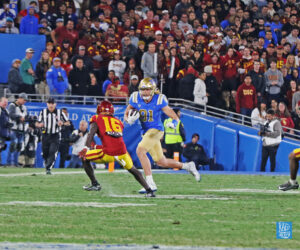 UCLA tight end Hudson Havermahl returns a kickoff during the contest. He finished the season with two touchdowns on 15 receptions. 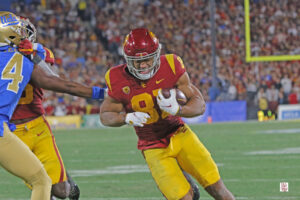 USC wide receiver Kyle Ford, pictured, caught three passes for 73 yards and one touchdown in the game. He also produced three receptions for 73 yards one week prior versus Colorado. 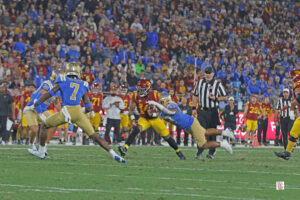 USC RB Raleek Brown (No. 14 pictured) attempts to secure the ball from UCLA LB Darius Muasau on his tackle and strip attempt. Brown, a freshman, finished with 919 all-purpose yards for the Trojans in 2022 (6 TDs). 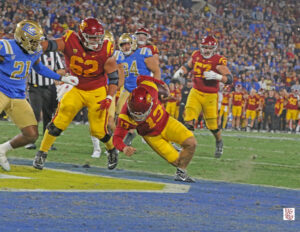 Caleb Williams' second quarter touchdown run was his seventh rushing score of the season. He finished the year with 10 scores on the ground. 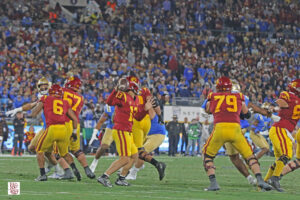 Williams -the 2022 Heisman Trophy winner- threw for 4,537 yards and 42 TDs this past season. He threw just five interceptions in 500 passing attempts. 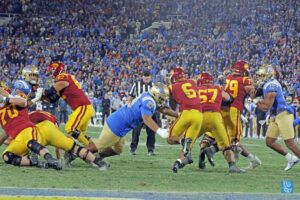 UCLA DL Jay Toia (No. 93 pictured) sets up his tackle vs. USC RB Austin Jones. Toia, a sophomore, finished 2022 with 30 tackles and three tackles for loss. 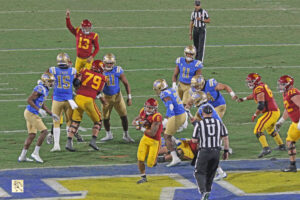 Jones (No. 6 pictured), however, came back to score in the third quarter. He finished with 120 yards rushing on 21 carries (2 TDs). In addition, he caught four passes for 57 yards in the game. 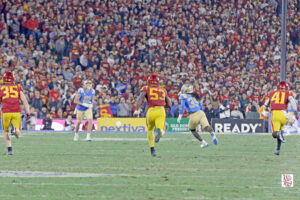 USC LB Shane Lee (No. 53 pictured) -an Alabama transfer- recorded nine tackles and an interception on the night. He runs down on the kickoff unit for the team as well. 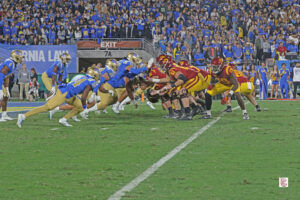 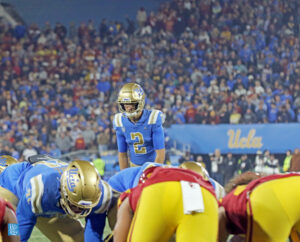 UCLA junior placekicker Nicholas Barr-Mira (seen setting up to kick before a fourth quarter extra point) is following a deep tradition of kickers at the school. 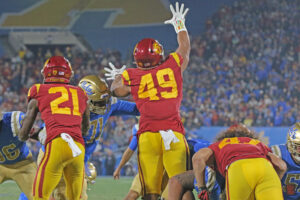 USC DL Tuli Tuipulotu (No. 49 pictured) attempts to block the field goal in the fourth quarter. Tuipulotu -the Pac-12 Defensive Player of the Year- finished second in the nation with 22 tackles for losses. 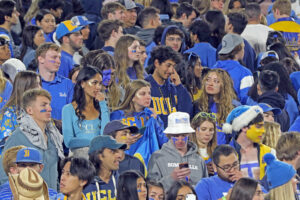 UCLA's fans were hoping to pull off the upset, but were left in disbelief on how the game ended.