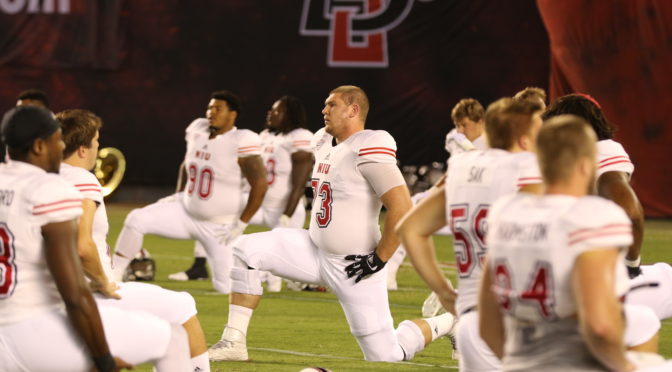 The 2019 NFL Combine featured a collection of very athletic offensive linemen on Day 1. We take a look at four players from the group who helped their respective stocks.

The former Western Tech High School star and Baltimore, Maryland native had already won his fair share of bar room brawls during the week of 2019 East-West Shrine practices. Tough to dislodge from inside at guard, he also slid his feet well at times during the week at left tackle.

The last player drafted from Morgan State was back in 2003. Former Bears and New York Giants tight end Visanthe Shiancoe impressed NFL scouts during his own combine performance with an eye-opening 39 1/2-inch vertical leap while weighing in around the 251-pound mark.

While that leap was impressive, the 36-inch vertical jump that Miles – a 2018 All-MEAC performer- turned in on Friday may end up as the most impressive athletic feat of the weekend. Why? He weighs in the 315-pound range. When you couple that with his 9’1″ broad jump, it is easy to quantify his lower body explosion on the field. His 4.75-second showing in the 20-yard short shuttle will also open the eyes of NFL teams. He is a near lock to become just the second Bear drafted in the last 37 years.

An above average postseason has been icing on the cake so far for Scharping, whose game is defined by his patience. On film, he frustrates defensive ends by always keeping his hands up around his numbers in a position ready to punch. He understands angles. The kinesiology graduate and Academic All-American offers teams flexibility. He started at right guard, right tackle and left tackle in school.

On Friday, he put to rest some doubts about his true foot quickness and explosiveness despite not running a 40-yard dash. He went under 4.7 seconds in the 20-yard short shuttle (4.69), posted an impressive 28-inch vertical jump and notched a respectable 7.77 time in the all-important three-cone drill. Perhaps even more impressive was that he did it while weighing in seven pounds heavier than he did at the 2019 Senior Bowl.

NFL teams want to see a player dominate his level of play (Division II) and Pipkins obliged, turning in an All-American campaign that routinely saw him finish versus overmatched personnel. Regardless of the personnel, he has shown an element of ‘nasty’ finishing linebackers and defensive ends once he gets his hands inside the numbers (2nd QTR/4:33, Minnesota State Moorhead ’18; Jones, Day 2, East-West Shrine ’19-pancakes him through ground).

Although he underwhelmed in the bench press (16 repetitions at 225 pounds), he made it up for it with a solid on-field workout. He was fluid changing directions and displayed much of the base that has been evident on film. On Friday, he ran a 5.12 40-yard dash, went an eye-opening 33 1/2 inches in the vertical jump and also posted an equally impressive 9-foot-6-inch broad jump. For good measure, he blazed a 7.61-second time in the three-cone drill.

When you hear the name Jordan you immediately think of the ability to sky over the competition. The former Buckeye has the look of a heavy NBA power forward. Despite 34 1/4-inch arms, he still posted a 32 1/2-inch vertical jump. He also recorded a broad jump (9’8″) that bested even some of the running backs, including Temple’s Ryquell Armstead, who ran a 4.45 40-yard dash.

It could partly explain how he’s been able to compensate versus leverage defenders at the center spot, where he can execute his combo-rub blocks with efficiency (see Tulane ’18). His pad level is still an issue at times and this was even apparent at the left guard spot in 2017 (see Indiana). His quickness, however, in the 20-yard short shuttle (4.71) helps explain his above average ability to pull in confined areas. Jordan helped his stock on Friday.