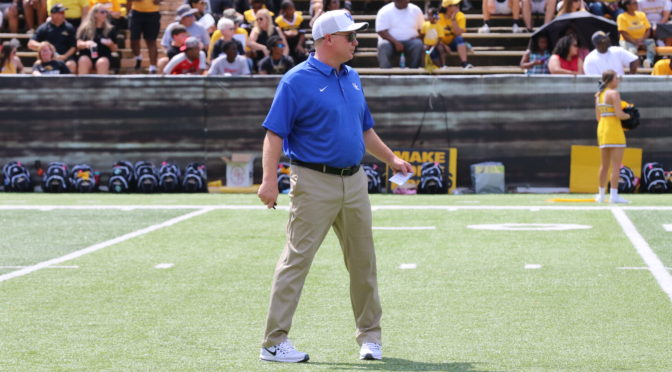 Head coach Mark Stoops’ defense got a boost when it found out senior safety Mike Edwards and senior linebacker Josh Allen (6’5, 230) would forgo the NFL Draft and return for another season in Lexington.  The defense should be in solid hands behind the two stalwarts.  On offense, junior running back Benny Snell, Jr. (5’11, 223) was productive, finishing the 2017 campaign with 1,333 rushing yards and 19 touchdowns. The key for the Wildcats will be who is under center.  Sophomores Gunnar Hoak (6’4, 206) and Terry Wilson (6’3, 205) will battle it out in camp to decide the starter.  No matter who wins, Stoops will look for ball security. The Wildcats enjoyed a bowl- eligible season behind Stephen Johnson, who completed 60 percent of his passes and threw just seven interceptions. If Kentucky can get the same type of smart quarterback play in 2018, look for them to compete in the SEC East.

Edwards has led SEC defensive backs in tackles for consecutive seasons.  The senior safety likes to crowd the line of scrimmage and is a force in run support.  He also has a knack for picking off opposing quarterbacks.  Last season, Edwards had four interceptions. Look for the Cincinnati native to continue to fine tune his craft this season and make the jump to the NFL in the spring.

September 8th at Florida
Kentucky went toe-to-toe with Florida last season before ultimately falling 28-27.  This year, the Wildcats will have to travel to Gainesville during the second week of the season. Stoops’ team could establish themselves as a legitimate power in the SEC East if they can secure a statement win against the Gators.

Although Baity has been beaten down the field on occasion (see Hall, Missouri ’17), he exhibits good feet in off-man for a taller cornerback.  In addition, he contains the necessary short memory to continue to battle after giving up plays.  While capable of reading the action instinctively to tackle on plays in front of him, there is some body-block tackling in his game.  The Wildcats have three pro prospects at the cornerback position (Chris Westry, Lonnie Johnson) entering 2018 and Baity is arguably the most fluid of the trio.  For him to carve out early-round consideration, he has to clean up the occasional concentration lapses that show up week-to-week.

According to DraftNasty’s Troy Jefferson, Kentucky will fall to Florida and Tennessee on the road and Mississippi State, Georgia and South Carolina at home. The Wildcats will still win enough games to qualify for a third consecutive bowl game.