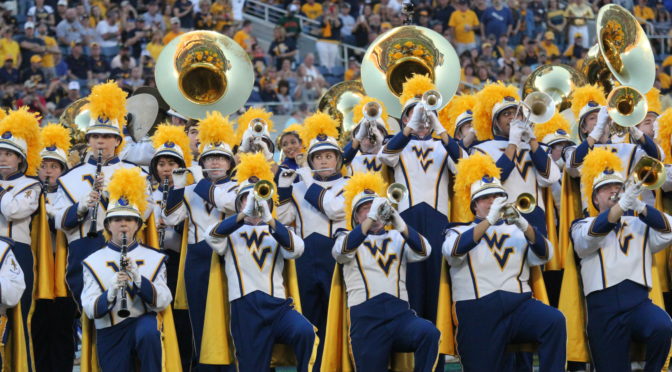 Dana Holgorsen’s eighth year at the helm in Morgantown has a chance to be his best. The Mountaineers will return a high-flying offense that averaged 34.5 points per game last season, which was 22nd-best in the NCAA.  Senior quarterback Will Grier and senior wide receiver David Sills (6’4, 210 ) are a dangerous combo.  Grier passed for 3,490 yards and 34 touchdowns in 2017 while Sills caught 18 of those touchdowns while posting 980 receiving yards. The Grier-Sills connection gets a lot of talk, and rightfully so, but junior wide receiver Marcus Simms (6’0, 194) is a speedy threat who can also help out in the return game.  Last season, Simms caught 35 passes for 663 yards and averaged 26 yards per kick return.  On defense, senior safety Dravon Askew-Henry (6’0, 203) returned from a season-ending knee injury in 2016 to rack up four pass deflections and 57 tackles in 2017.

7 Will Grier 6’2 223 QB-Senior
Grier made a strong impression during his first season in Morgantown.  The Florida transfer completed 64-percent of his passes and will enter this season as a front runner for the Heisman trophy.  He has good feet in the pocket and a quick release, which makes him a perfect fit in West Virginia’s offense.  The Mountaineers signal caller did throw seven interceptions during a four-game stretch to end the season.  If Grier can cut down on the turnovers and continue to move the ball efficiently, then he will have a chance at being a first round pick in next April’s NFL Draft.

November 23rd against Oklahoma
West Virginia has never appeared in a Big 12 Championship game and the team usually standing in their way is the Oklahoma Sooners.  This year is no different. The Mountaineers will play Oklahoma at home the last week of the season. Last season, the Sooners defeated West Virginia 59-31.  With major turnover at Oklahoma and West Virginia returning a number of seniors, this year’s matchup could be a little tighter.

Askew-Henry has displayed adequate range in the middle of the field to get all the way to the sidelines (ECU ’17).  He takes above average cross-field angles.  As the team’s spur (OLB-Nickel), he’s heavily involved in the running game but also has covered slot receivers.  His injury history -as was referenced earlier- is a bit of a concern.   In addition, he has not always kept his feet in some open field tackling situations.  The former Freshman All-American can take a big leap this season with a healthy, productive senior campaign.

Draftnasty’s Troy Jefferson is predicting the Mountaineers will lose their first game of the season against Tennessee in Charlotte and go undefeated from then on out. The 11 wins would set a school-record for Dana Holgorsen at West Virginia and put the Mountaineers in the College Football Playoff discussion. A win in the Big 12 Championship game could be the final piece of the resume’.