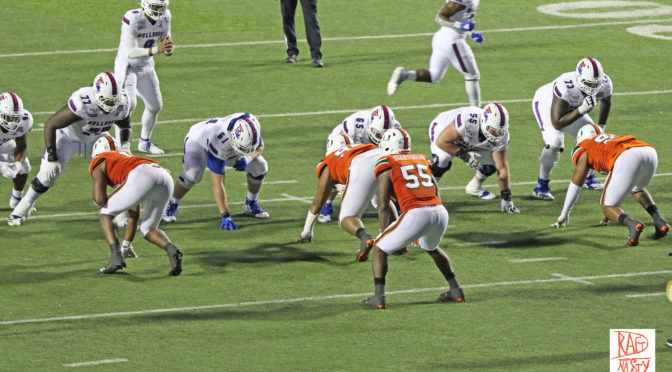 Former Miami (Fla.) linebacker Shaquille Quarterman -a four-time All-ACC selection at linebacker- finished his storied career with 356 tackles, ninth all-time in school history. In 2019, Quarterman became the only Hurricane to start 52 consecutive games without missing a start. DraftNasty editor-in-chief Corey Chavous caught up with Quarterman during the week of the 2020 East-West Shrine Bowl. They talked about why finishing was an important part of his legacy. Quaterman modeled his game after his idol, a former Hurricanes linebacker and NFL first round pick who currently serves as his mentor.

Corey: First, I’d like to ask how do you think the week has gone for you so far?
Quarterman: I think the week has progressed for me very well. First day of pads, I already knew it was knocking off the dust. Not for just me, but everybody out here. As it gets better, people get more comfortable, you get to see who really can play. So today I felt like it was night and day from my first day. I just feel like as the week keeps going I’m going to get even better.

Corey: We actually shot your last bowl game (2019 Independence Bowl). A lot of your teammates made the decision not to play in that game. For you, as a team captain, one of the things that you talked about was just how important that last game was to you. Ended that game with 11 tackles. Even though it was a little bit of a debilitating loss, your defense played well. Talk about how you felt about finishing the right way.
Quarterman: I’m a man of principle. I really stick to my principles and morals. I could not have my team out there and feel like they’re better off without me because I wanted to go train just a couple of days early. That’s not the way I want to set a standard. That’s all I’ve ever talked about was the standard. It’s not bailing on your team, because I love my guys and they made their decisions for why they made their decisions. But I’m a team guy, that’s all it is. I couldn’t be on the sidelines and then I was thinking about going but that makes it worse. I’m going to play with my team.

Corey: Right.
Quarterman: 55 is going to lead his team out there. I never folded. I never did that.

Corey: Our notes on you surround the ability to stack-and-shed. That is one of the things that is a little bit underrated in your game. Talk about why that is important to you…using your hands as a linebacker.
Quarterman: Because that’s how you’ve got to survive in the league (NFL). In college, you can still get away with being more athletic than a lot of guys. But at the next level, that margin of error is cut drastically shorter. You have to be able to do a lot of things to survive. It’s about longevity. The standard career time is already like 2.3 years, so if I can’t use my hands as a linebacker I don’t see how I’m going to see the field. And that’s just being honest. Because it’s a business, it’s about producing. I undertand that. That was one of my critiques last year, so this year I knew I had to work on that. I knew I had to put it on tape multiple times. Like you said, I put it on tape, but it’s very underrated. So I’ve got to change something about me to make it not underrated.

Corey: Now if there’s a question the scouts are asking you when you talk to them. What’s the biggest question they have for you the rest of the postseason? Certainly you’re coming down here this week dispelling any questions they may have. What do you hear the most?
Quarterman: It’s always about my ability to play in space. I’ve been in the box so long at Miami, so good at playing the run, that my coaches didn’t have to worry about that. So if you don’t have to worry about one spot, you can find pieces around him that could play the pass.

Corey: Absolutely.
Quarterman: So I was never groomed for my pass coverage basically. That’s why those question marks exist.

Corey: And they had you coming forward a lot.
Quarterman: Right.

Corey: The tackles for loss weren’t just this year, they were a year ago as well.
Quarterman: Exactly.

Corey: Run blitzes, timing run blitzes.
Quarterman: They just let me do what I do best. And I understand that. But now I’m in a position where I’ve got to show people that I can do the other side of the spectrum.

Corey: And how have you felt that has gone out here (East-West Shrine week)?
Quarterman: The first day was rusty. Today, a whole 180. I didn’t win a single one-on-one yesterday, and I didn’t lose one today.

Corey: The tradition at your school is pretty deep at the linebacker position. But if there is a player, even beyond Miami (Fla.), that you’ve looked up to from the NFL perspective -either presently or in the past- who would that be? .
Quarterman: Jon Beason (10-year NFL veteran, former Miami (Fla.) linebacker-2007 NFL Draft, 1st Round, 25th overall, Carolina Panthers). That’s my mentor, man.

Corey: Wow. Really good player.
Quarterman: That’s my mentor. I want to play like him. I still watch his tapes. He let me get a hold of his tapes, so I still watch him. We’re almost built the same. I’m a little taller than him, but as soon as I stepped on campus they talked about our neck sizes and stuff like that. I just love the way he plays the game. I try to do everything that he would do and beyond. Because he did everything the right way. He played through injuries and all that. To have a chance to go to Miami (Fla.) and meet your idol and have him mentor you. And take you underneath his wing and see that he sees it in you. It’s something different. It’s a lot of weight on that.

Corey: Four-year starter at Miami from your true freshman year on. The meaning of that?
Quarterman: It’s different. It’s hard. Very difficult. I just really thank Coach Richt and Coach Diaz for trusting in me. It takes a lot to put a true freshman out there…at any position in college football. I really appreciate that. I tried to uphold it as long as I could.

Corey: Well, man, good luck and continue the tradition. I know you gotta get outta here. Nice to meet you. Enjoyed watching you throughout your career.
Quarterman: I appreciate that.