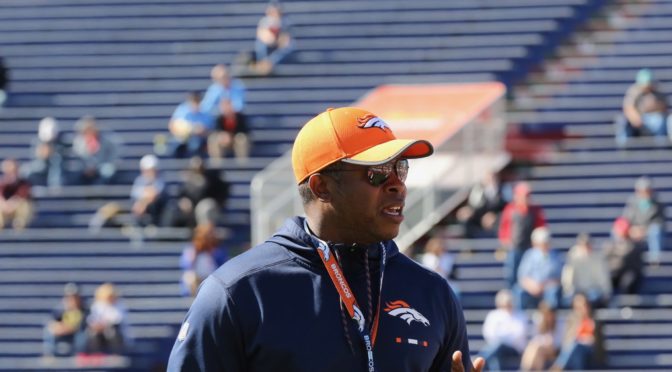 Offensive miscues and special teams errors doomed the Los Angeles Chargers against a division rival. The Denver Broncos ended the Chargers six-game win streak in a hard-fought 23-22 affair.  DraftNasty’s Troy Jefferson gives his impressions in this in game report:

The Chargers offensive line stood out in pass protection against the Broncos, who rank in the top ten in sacks. While San Diego did give up three sacks, two of those were more of a reflection of quarterback Philip Rivers holding on to the ball too long rather than 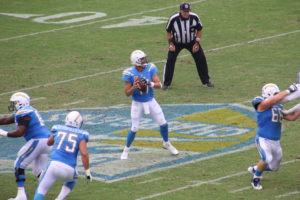 poor offensive line execution.  The Chargers out-gained the Broncos by 154 yards, which is a testament to how the offensive line played. The unit’s best work may have came on a screen pass to running back Melvin Gordon, where offensive lineman Dan Feeney and Michael Schofield III got out in front to pave the way for a 32-yard gain.  Holding a defense that features Von Miller and Bradley Chubb is no easy task, but the Los Angeles Chargers should be proud of the offensive line’s performance on Sunday.

Veteran quarterback Philip Rivers will shoulder a fair load of the blame after he threw two interceptions against the Broncos. Despite throwing for 401 yards, the interceptions not only cost the Chargers potential points but allowed Denver to score in both instances.  In addition to subpar quarterback play, the Chargers committed 10 penalties in the first half and settled for two field goals.

“Those are things we’ve stayed away from — penalties and turnovers — but they showed up today.  For whatever reason, I don’t know. We’ll figure it out, though,” head coach Anthony Lynn said in the post game press conference.

“I don’t think they played well at all,” Allen said after the game, via ESPN.com. “We dominated the game. Turnovers, we gave them some points and that’s what happened. They suck.”

To make matters worse, Mike Badgley missed an extra point in the third quarter. Denver no doubt earned their victory by driving the length of the field to get into field goal range as time expired but leading up to the final drive, Los Angeles certainly squandered plenty of its opportunities.

The Broncos have a talented trio of rookies to rely on offensively. Running backs Phillip Lindsay and Royce Freeman complement each other well as Lindsay primarily serves as the third down motion back and Freeman the more traditional power back. On the outside at receiver, Courtland Sutton also showed his playmaking ability. Lindsay finished with 106 combined rushing and receiving yards while Freeman had 23 yards rushing and a touchdown.  Sutton caught three passes for 78 yards.  Lindsay, who was undrafted, has been the most productive out of the bunch, rushing for 670 yards and catching 24 passes for 187 yards on the season. If Denver can get more consistent production out of Sutton and Freeman, the Broncos could have a strong young nucleus on offense going forward.