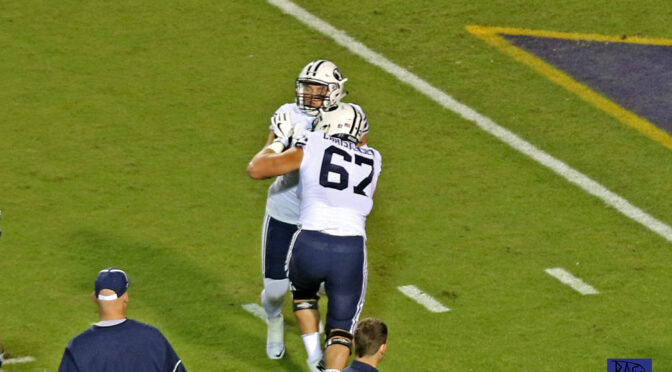 2021 NFL Draft prospect Zach Wilson’s 425-yard, five-touchdown performance (3 PASS, 2 RUSH) led the day -and rightfully so- and now we take a look at some of the other pro prospects from BYU’s 49-23 victory over the UCF Knights in the 2020 Boca Raton Bowl.

Tonga’s stat line will never jump off the screen. In today’s NFL, the splash interior defensive line prospects typically are able to work to half a man for quick penetration. This is not Tonga’s game. Where he does flash in the passing game revolves around his timing to cloud passing lanes.

He posted a pass breakup in this contest and recorded three in the team’s final four games of 2020. He finished his career with 12 pass deflections. The former rugby star is strong, runs well in a straight line and projects as a zero-technique in three-man fronts.

Milne has been a model of consistency all season for the Cougars and this game was no different. There were several games this season where he flashed down the field capability in terms of high-pointing the football (see Houston ’20). The former walk-on uses deception and a quick-footed style to fool defensive backs. It is a big reason he was the team’s second-leading receiver on third downs. One of his better patterns is the stutter-and-go comeback route (see Western Kentucky ’20), but there have been occasions where he’s made deft one-hand grabs from his quarterback down the field in contested situations (TD vs. Sails, USF ’19). Milne recently declared for the 2021 NFL Draft and he could be the program’s first receiver picked since Austin Collie in 2008 (Indianapolis Colts, 4th Round, 127th overall).

For the most part, Christensen has been steady. There are some occasions where players get the best of him due to a questionable anchor (see Boyles, USF ’19; Wiley, UTSA ’20). In those instances, he has even been knocked to the ground. Mobility and foot quickness, however, make him a viable option to hear his name called this spring after recently declaring for the 2021 NFL Draft. In this contest, he was adept at baiting the opponent up the field, particularly on QB Zach Wilson’s quarterback draw for a touchdown in the first quarter. Christiensen is also agile as a pulling option on the perimeter (1st QTR/0:25, Boca Raton ’20). Can he long-arm the opponent when quick-setting (2nd QTR/5:11, Boca Raton ’20)?

After not playing against USF, Anderson was solid in what may have been his last collegiate game (16 carries, 73 yards). He does have the option of returning for one more season. The former wide receiver finishes with over 90 career receptions and a healthy six yards per carry average.

An adept punt returner who could carve out a niche in that role, he has more than one tool in his skill-set. His foot speed will likely determine whether he can sneak into an NFL training camp.

As the season has gone on, Rex continued to work the seams both in the field and the Red Zone. He scored two or more touchdowns in five of the team’s final seven contests. The team will line him up one-on-one for back-shoulder fades (Western Kentucky ’20, 2nd QTR/0:21). And just think what this offense would have looked like had NFL prospect Matt Bushman been available all season. Versus UCF, Rex led the team with five receptions for 96 yards and two touchdowns. One of his touchdowns came on a flea-flicker where he was left wide open down the right sidelines.

The former San Clemente High School (Calif.) product was a basketball recruit and part of the 2017 recruiting class. He has already served a mission in Samoa for The Church of Jesus Christ of Latter-Day Saints. Is the future now?