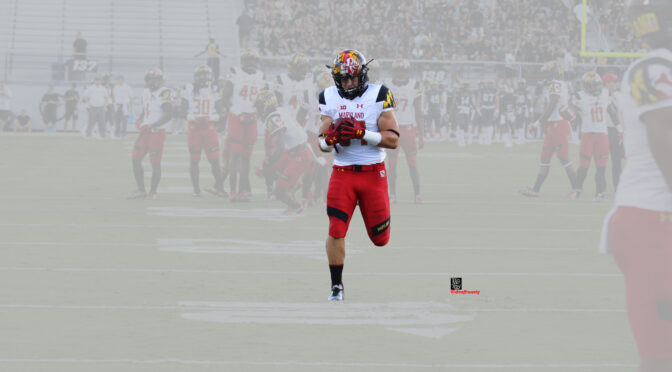 Former Maryland running back Jake Funk brings a multitude of possibilities to an NFL team’s table this spring. The former Damascus High School (Md.) product ranks as our 16th-best all-purpose prospect in the 2021 NFL Draft. Find out why in our scouting report on Funk.

What makes this player NASTY…(Strengths): Athletic bloodlines. Classroom warrior. As a RB, he cuts off of his inside foot to get outside in one motion. Plays fast on outside run schemes (4th QTR/3:38, TD, Minnesota ’20). Demonstrates positive vision in pass pro (4th QTR, Minnesota ’20). At his best on downhill gap-schemed runs. Translates speed-to-power on contact. Even though he has to chop his feet to get back vertical, he flashes an ability to maneuver his paths (2nd QTR/11:51, Penn State ’20). Catches the ball well on check down passes. He has returned kickoffs for the team (as an off kickoff returner). Gets downhill with good speed and a straight-ahead style in this aspect (Temple ’19, 1st KOR of game). Outstanding special teams player. Used as a hold-up player at RE on the punt return unit. When running down at the R3 position on the kickoff team, he measures up his tackling entries from 10-to-20 yards away and then sinks low to clip the legs of the KOR (tackle inside the -12-yd L, 3rd QTR, Temple ’19). Uses the wrap around technique to get back into his lane in KO cover. He also uses butt-and-press techniques to run through blockers. Gets excited to cover kicks!! The team even used him in motion on the punt team as a gunner-type (Temple ’19). As a tackle on the punt team, Funk uses a snatch-and-pull technique to get rid of hold-ups by the blockers. Served as a wing on the punt team as well. 28 career tackles.

Weaknesses: After making cuts to reach the edge, he has to chop his steps to make inside-out defenders miss (4th QTR/4:40, Minnesota ’20). After his straight-line speed, he lacks a defining trait as a running back. Longer ends on the punt team can get off of his hold-up attempts with their length (2nd QTR/12:05, Temple ’19). Major durability concerns. Had a wrist injury in 2018 that was followed by a torn ACL. He then tore his ACL in the same knee (left) vs. Temple early in 2019 covering a kick (in a game he was playing very well).

Time to get NASTY (Our Summary): Since Funk came out of high school, he has gotten bigger, stronger and faster in school. All of this occurred while enduring two torn ACLs to the same knee in consecutive seasons. This speaks to his work ethic and overall football character. Prior to the injury, he ranked as one of the top special teams players in this year’s draft class. Adding a breakout season at running back -something the team felt he was on his way to in 2019- is just adding icing on the cake. So can Funk stay healthy? This is the question for teams as they ponder whether to use a draft pick (perhaps late on Day 3) on a player who could immediately be one of your core special teams players while adding value as a runner with some home run capability. That capability would be maximized in a gap-schemed run game that features some man blocking and pulling offensive linemen. We have no issues with him being competent in pass protection. Funk, one of our favorite all-purpose prospects in the 2021 NFL Draft, has Day 3 value and…..lots of it.